PRIMARY TRAIL  (AoY Points Tournaments)
Our club currently fishes two tournament trails. The primary trail consists of bass tournaments with points awarded to each full chapter member for Angler of the Year (AoY) standings. Affiliate members and invited guests are welcome to fish this trail but are not awarded points for AoY. The angler with the most points at the end of the year is awarded the Angler of the Year award; there can be more than one Angler of the Year should there be a tie in points.


TOURNAMENT OF CHAMPIONS (ToC)
Teams that finish in a paying position from each official primary trail tournament can compete in a two day Tournament of Champions (ToC) at the end of the year for the title of Season Champions. In the situation where a boater has placed in a paying position more than once but with different partners, the boater must choose which of these partners he/she fishes with in the ToC.

All chapter members who have competed in at least half of the primary trail tournaments for a season are also eligible to compete in the Tournament of Champions with their regular partner or another chapter member. The two highest placing boats from this field of anglers will move on to participate in the second day of the tournament.

Each boat competing in the ToC must have at least one full chapter member. Entry fee is 120 per boat which includes lunker payout for both days.


SECONDARY TRAIL (Fun Tournaments)
Our secondary trail consists of a variety of multi-species, multi-format tournaments that include sweetheart, rock bass, draw, pike/pickerel, and open bass tournaments. Points are not awarded for these tournaments, and with the exception of opens, these tournaments are closed to anyone who is not a member or invited guest. 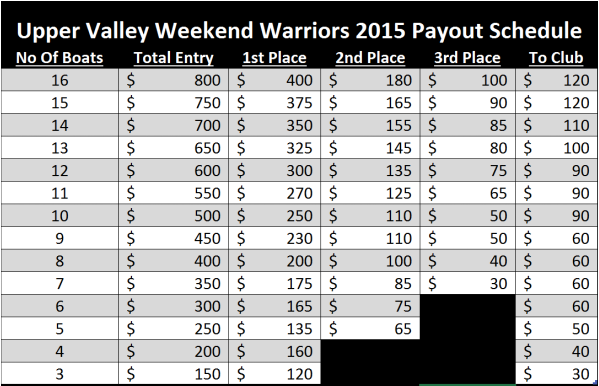